In April 2015, former Australian Prime Minister, Tony Abbott, decreed that vaccination will be compulsory for children of all ages to access financial inducements.[1]

I suggest this action by Tony Abbott is problematic because there are some questionable vaccine products and repeat vaccinations on the Australian National Immunisation Program Schedule[2], e.g. the second dose of live measles, mumps and rubella (MMR) vaccine, and repeated ‘boosters’ with the failing pertussis vaccine.Controversial HPV vaccination will also be compulsory for children in future.

Former Prime Minister Abbott’s edict for compulsory vaccination contravenes the obligation for ‘legally valid consent’ before vaccination, as outlined in Section 2.1.3 of the Australia Immunisation Handbook[3], which includes:

For consent to be legally valid, the following elements must be present: 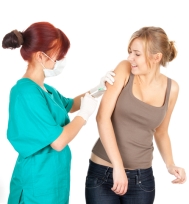 One of the questionable vaccine products on the Australian National Immunisation Program Schedule is the Gardasil human papillomavirus (HPV) vaccine, which was first rejected by the Pharmaceutical Benefits Advisory Committee in 2006, but subsequently fast-tracked in Australia in 2007 after interference by then Prime Minister John Howard[4] who told then Federal Health Minister Tony Abbott “that the immunisation program should proceed.  And pronto”.[5]  See my letter to Prime Minister Abbott challenging compulsory vaccination with the Gardasil HPV vaccine (4 July 2015).

Also see my letter to former Prime Minister Abbott referring to a cartoon about the controversial subject of compulsory vaccination.  Michael Leunig’s cartoon titled ‘Fascist epiphany’ uses Michelangelo’s iconic image of the near-touching hands of God and Adam to ironically represent ‘the God of Science’ handing a syringe to politicians, granting them“the divine right to enforce mass medication upon babies and small children”.  Leunig has been castigated for his implied criticism of vaccination in the Letters page of The Age and on Twitter.  However, I appreciate Leunig’s courage in stirring the pot on a controversial and complex subject relevant to our freedom and bodily autonomy, i.e. government mandated vaccination.  In my letter to former Prime Minister Abbott, I argue citizens are entitled to query the ever-increasing list of vaccine products on the Australian Federal Government’s vaccination schedule.  According to my calculations, children aged from birth to 15 years will have at least 43 doses of vaccines via combined vaccines and revaccinations.  This does not include the annual flu vaccination we are all being pressured to have.  We have no idea of the long term consequences of this increasing vaccine load.  See my letter to former Prime Minister Abbott dated 26 August 2015.

I have also forwarded correspondence to Malcolm Turnbull (former Minister for Communications) as  he co-hosted a Facebook Forum on the Government’s Childcare Package with Scott Morrison.)

I will now pursue this matter with Prime Minister Malcolm Turnbull and other parties.

For some examples of how Tony Abbott’s ‘no jab, no play and no pay’ announcement was widely reported in Australia, see:

For background on the lucrative vaccine industry see: Over-vaccination – A Multi-Billion Dollar Market